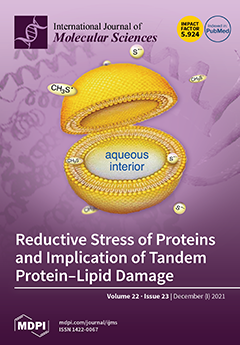 Cover Story (view full-size image): Reductive radical stress represents the other side of the redox spectrum, less studied but equally important compared to oxidative stress. Reactions of hydrogen atoms (H.) and hydrated electrons (e–aq) with peptides/proteins induce chemical transformations of methionine and cystine residues into α-aminobutyric acid and alanine, respectively. Desulfurization processes and formation of diffusible sulfur-centered radicals, such as CH3S. and HS., are the key steps. Sulfur-centered radicals generated from proteins can trigger cis–trans isomerization of unsaturated lipids in membranes, as demonstrated in biomimetic models of proteo-liposomes. In pharmaceutical and pharmacological contexts novel perspectives of such reactivity involve stability of formulations and mode of action of drugs. View this paper.
Previous Issue
Volume 22, November-2
Next Issue
Volume 22, December-2
We use cookies on our website to ensure you get the best experience. Read more about our cookies here.
Accept
We have just recently launched a new version of our website. Help us to further improve by taking part in this short 5 minute survey here. here.
Never show this again