Submit to Cells Review for Cells 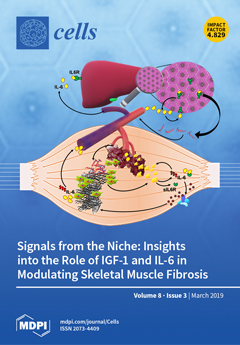 Cover Story (view full-size image): Fibrotic tissue deposition is generally associated with an altered interplay among the different cell components in muscle tissue, affecting regenerative processes. The expression of soluble mediators, including cytokines and growth factors, can modulate cell–cell communication, regulating critical steps of muscle healing, including regenerative fibrogenesis and myogenesis. In particular, IGF-1 and physiological levels of IL-6 play important roles in muscle regeneration, exerting a pro-myogenic activity, whereas elevated levels of IL-6 negatively impact muscle repair. Here, we focus on cellular and molecular mediators of skeletal muscle fibrosis and discuss how the altered expression of specific niche factors can impinge on the homeostatic mechanisms of tissue repair. View this paper.
Previous Issue
Volume 8, February
Next Issue
Volume 8, April
We use cookies on our website to ensure you get the best experience. Read more about our cookies here.
Accept
We have just recently launched a new version of our website. Help us to further improve by taking part in this short 5 minute survey here. here.
Never show this again