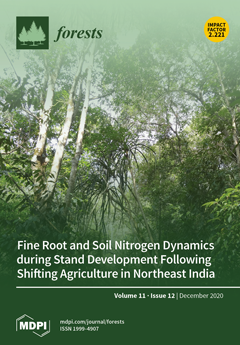 Cover Story (view full-size image): In Northeast India, and many other parts of the world, shifting cultivation is an important land-use sustaining the livelihoods of large numbers of rural people. Despite this, there are concerns regarding shortened fallow length and forest recovery following cultivation. In this paper, we determine the important, but often ignored, below-ground components of ecosystem recovery focusing on roots and their interactions with soil nitrogen availability. We also show how there are strong seasonal patterns of root biomass, production, and nitrogen cycling in these montane forests that are on the very edge of the tropics at 23 degrees north. The picture here shows our natural forest reference site, the Reiek Community Forest. View this paper
Previous Issue
Volume 11, November
Next Issue
Volume 12, January
We use cookies on our website to ensure you get the best experience. Read more about our cookies here.
Accept
We have just recently launched a new version of our website. Help us to further improve by taking part in this short 5 minute survey here. here.
Never show this again