Submit to Materials Review for Materials 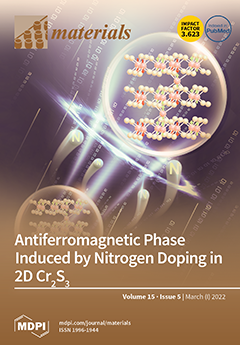 Cover Story (view full-size image): Exploration for new members of air-stable 2D antiferromagnetic magnets to widen the magnetic families has drawn great attention due to its potential applications in spintronic devices. In addition to seeking intrinsic antiferromagnets, externally introducing antiferromagnetic ordering in existing 2D materials may be a promising way. In this work, in situ nitrogen doping growth of ultrathin 2D Cr2S3 nanoflakes can be achieved which could induce a new phase with antiferromagnetic ordering in Cr2S3 nanoflakes. View this paper
Previous Issue
Volume 15, February-2
Next Issue
Volume 15, March-2
We use cookies on our website to ensure you get the best experience. Read more about our cookies here.
Accept
We have just recently launched a new version of our website. Help us to further improve by taking part in this short 5 minute survey here. here.
Never show this again