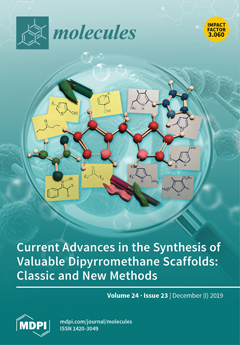 Cover Story (view full-size image): Dipyrromethanes constitute a widely known and relevant class of useful synthetic building blocks in the chemistry of several high-value pyrrolic macrocycles, e.g. calixpyrroles, porphyrins, chlorins, corroles, saphyrins, and dipyrromethene compounds, such as boron dipyrrins (BODIPYs) and various related transition metal coordination complexes. A bibliographic review on the synthesis of dipyrromethane scaffolds surveying the past six years (2014-2019) is herein provided. Classic synthetic approaches employing the acid-catalyzed condensation of pyrroles and aldehydes or ketones, as well as modern strategies that allow the synthesis of original dipyrromethane structures with novel substitution patterns are presented. View this paper.
Previous Issue
Volume 24, November-2
Next Issue
Volume 24, December-2
We use cookies on our website to ensure you get the best experience. Read more about our cookies here.
Accept
We have just recently launched a new version of our website. Help us to further improve by taking part in this short 5 minute survey here. here.
Never show this again