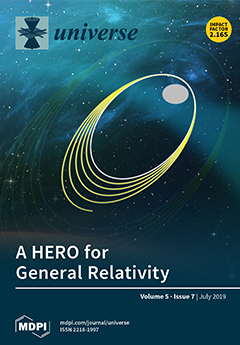 Cover Story (view full-size image): The Highly Eccentric Relativity Orbiter (HERO) is a space-based mission concept which aims to perform several tests of post-Newtonian (pN) gravity with a preferably drag-free spacecraft in a highly elliptical orbit. HERO may detect, for the first time, the pN linear trend of the semimajor axis a induced by the Earth's quadrupole, amounting to ≃4–12 cm yr−1 for certain orbital configurations. The secular decay of a of a geodetic satellite was recently measured with an error of 0.7 cm yr−1. Also, the pN Lense-Thirring and Schwarzschild effects could be accurately tested, depending on the drag-free apparatus. Moreover, the large orbital eccentricity would allow one to constrain several modified models of gravity and to measure the gravitational redshift with improved accuracy as well. View this paper.
Previous Issue
Volume 5, June
Next Issue
Volume 5, August
We use cookies on our website to ensure you get the best experience. Read more about our cookies here.
Accept
We have just recently launched a new version of our website. Help us to further improve by taking part in this short 5 minute survey here. here.
Never show this again