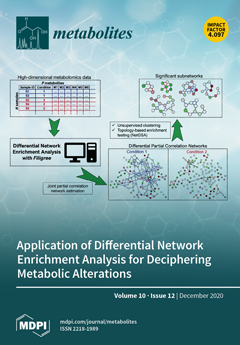 Cover Story (view full-size image): Filigree is a Java-based tool that implements our previously published Differential Network Enrichment Analysis (DNEA) algorithm. Filigree can build robust data-driven partial correlation networks from high-dimensional metabolomics and lipidomics data. If the number of metabolites far exceeds the number of samples, Filigree can perform feature aggregation to reduce data dimensionality. Our methodology can also handle imbalanced experimental designs. Filigree provides an alternative to traditional knowledge-based enrichment testing methods. We demonstrate the utility of Filigree by applying it to previously published studies analyzing the metabolome in the context of metabolic disorders. View this paper
Previous Issue
Volume 10, November
Next Issue
Volume 11, January
We use cookies on our website to ensure you get the best experience. Read more about our cookies here.
Accept
We have just recently launched a new version of our website. Help us to further improve by taking part in this short 5 minute survey here. here.
Never show this again