Submit to Coatings Review for Coatings 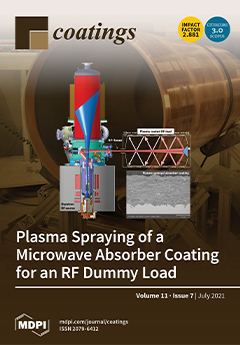 Cover Story (view full-size image): Gyrotrons are powerful microwave generator and essential component in fusion reactor research facilities. Their purpose is to provide a focused microwave beam typically in the range of 140–170 GHz and a power output of 1–2 MW. Electron cyclotron resonance heating is the main concept for plasma heating in toroidal fusion reactors based on the magnetic confinement principle. For gyrotron testing, a specially designed RF load is needed to absorb the intense microwave radiation without taking damage. Large copper tubes with an internal absorber coating are used for this purpose. The water-cooled unit is capable of absorbing 1–2 MW radiation and converting it to heat. The absorber coating consists of a plasma-sprayed mixed oxide that is applied to the inner surface of the tube. View this paper
Previous Issue
Volume 11, June
Next Issue
Volume 11, August
We use cookies on our website to ensure you get the best experience. Read more about our cookies here.
Accept
We have just recently launched a new version of our website. Help us to further improve by taking part in this short 5 minute survey here. here.
Never show this again