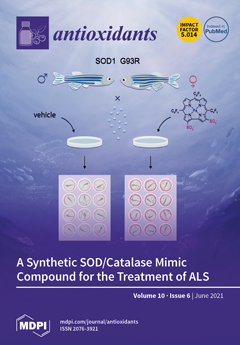 Cover Story (view full-size image): The amphipolar iron(III) corrole 1-Fe has emerged as a promising therapeutic agent for oxidative-stress-related diseases. It decomposes reactive oxygen and nitrogen species in a highly catalytic and effective manner, acting as a synthetic SOD/catalase/thioredoxin enzyme, decomposing superoxide anion radical, hydrogen peroxide and peroxynitrite, respectively. 1-Fe displays a robust efficacy in murine models of diabetes, neuropathy, and atherosclerosis, and further research has described its potential as a therapeutic agent for Parkinson’s and Alzheimer’s diseases. In this study, we disclose the efficacy of 1-Fe in a G93R-mutated SOD1 ALS zebrafish model. The displayed results disclose a substantial improvement in locomotor activity for ALS fish treated by 1-Fe relative to their non-treated counterparts. View this paper.
Previous Issue
Volume 10, May
Next Issue
Volume 10, July
We use cookies on our website to ensure you get the best experience. Read more about our cookies here.
Accept
We have just recently launched a new version of our website. Help us to further improve by taking part in this short 5 minute survey here. here.
Never show this again