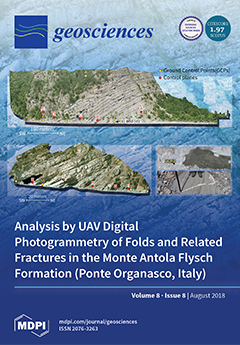 Cover Story (view full-size image): The folds and fractures affecting Monte Antola formation in the area of Ponte Organasco (Northern Apennines-Italy) were analyzed by Unmanned Aerial Vehicle Digital Photogrammetry (UAVDP). This technique allowed the realization of 3D models interpreted in a stereo vision by collecting digital measures of strata, fractures and fold axes and axial planes. The analysis revealed the presence of a series of folds affected by four main sets of fractures that seem to be linked to the folding deformation. The study also shows that UAVDP can overcome the main limitations of field structural analyses. View Paper here.
Previous Issue
Volume 8, July
Next Issue
Volume 8, September
We use cookies on our website to ensure you get the best experience. Read more about our cookies here.
Accept
We have just recently launched a new version of our website. Help us to further improve by taking part in this short 5 minute survey here. here.
Never show this again