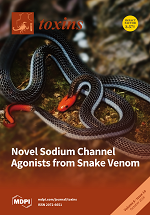 Cover Story (view full-size image): Sodium channels are central to a myriad of diseases and disorders ranging from pain through to neuromuscular disorders. Effects upon the Nav 1.4 sodium channel subtype range from activation, delay of inactivation, and inhibition. Effects therefore range from hyperstimulated muscle contraction producing rigid paralysis (hperkalemic periodic paralysis and myotonia) through to inability to contract muscles (hypokalemic periodic paralysis). This article reports the discovery in the venom of the long-glanded blue coral snake (Calliophis bivirgatus) novel peptides that are the first vertebrate venom peptides selective for Nav 1.4 sodium channel delay of inactivation. These peptides will facilitate further work to probe the mechanism of activation which results in inhibition of channel deactivation.View this paper.
Previous Issue
Volume 8, September
Next Issue
Volume 8, November
We use cookies on our website to ensure you get the best experience. Read more about our cookies here.
Accept
We have just recently launched a new version of our website. Help us to further improve by taking part in this short 5 minute survey here. here.
Never show this again