A Comprehensive View of the Structural and Functional Alterations of Extracellular Matrix by Snake Venom Metalloproteinases (SVMPs): Novel Perspectives on the Pathophysiology of Envenoming
Previous Article in Journal

The Snake with the Scorpion’s Sting: Novel Three-Finger Toxin Sodium Channel Activators from the Venom of the Long-Glanded Blue Coral Snake (Calliophis bivirgatus)

Millions of years of evolution have fine-tuned the ability of venom peptides to rapidly incapacitate both prey and potential predators. Toxicofera reptiles are characterized by serous-secreting mandibular or maxillary glands with heightened levels of protein expression. These glands are the core anatomical components of the toxicoferan venom system, which exists in myriad points along an evolutionary continuum. Neofunctionalisation of toxins is facilitated by positive selection at functional hotspots on the ancestral protein and venom proteins have undergone dynamic diversification in helodermatid and varanid lizards as well as advanced snakes. A spectacular point on the venom system continuum is the long-glanded blue coral snake (Calliophis bivirgatus), a specialist feeder that preys on fast moving, venomous snakes which have both a high likelihood of prey escape but also represent significant danger to the predator itself. The maxillary venom glands of C. bivirgatus extend one quarter of the snake’s body length and nestle within the rib cavity. Despite the snake’s notoriety its venom has remained largely unstudied. Here we show that the venom uniquely produces spastic paralysis, in contrast to the flaccid paralysis typically produced by neurotoxic snake venoms. The toxin responsible, which we have called calliotoxin (δ-elapitoxin-Cb1a), is a three-finger toxin (3FTx). Calliotoxin shifts the voltage-dependence of NaV1.4 activation to more hyperpolarised potentials, inhibits inactivation, and produces large ramp currents, consistent with its profound effects on contractile force in an isolated skeletal muscle preparation. Voltage-gated sodium channels (NaV) are a particularly attractive pharmacological target as they are involved in almost all physiological processes including action potential generation and conduction. Accordingly, venom peptides that interfere with NaV function provide a key defensive and predatory advantage to a range of invertebrate venomous species including cone snails, scorpions, spiders, and anemones. Enhanced activation or delayed inactivation of sodium channels by toxins is associated with the extremely rapid onset of tetanic/excitatory paralysis in envenomed prey animals. A strong selection pressure exists for the evolution of such toxins where there is a high chance of prey escape. However, despite their prevalence in other venomous species, toxins causing delay of sodium channel inhibition have never previously been described in vertebrate venoms. Here we show that NaV modulators, convergent with those of invertebrates, have evolved in the venom of the long-glanded coral snake. Calliotoxin represents a functionally novel class of 3FTx and a structurally novel class of NaV toxins that will provide significant insights into the pharmacology and physiology of NaV. The toxin represents a remarkable case of functional convergence between invertebrate and vertebrate venom systems in response to similar selection pressures. These results underscore the dynamic evolution of the Toxicofera reptile system and reinforces the value of using evolution as a roadmap for biodiscovery. View Full-Text
Keywords: toxicofera; venom; evolution; neurotoxin; sodium channel; pharmacology toxicofera; venom; evolution; neurotoxin; sodium channel; pharmacology
►▼ Show Figures 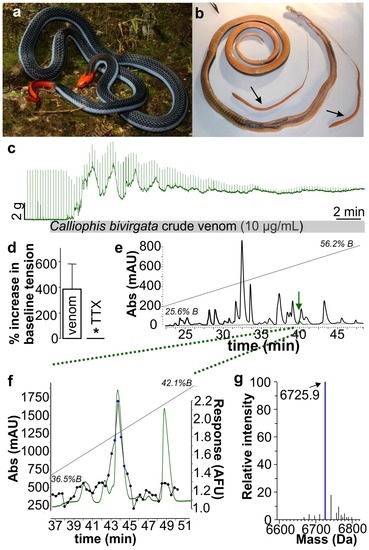