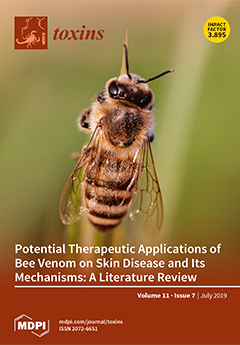 Cover Story (view full-size image): Corticosteroids and antimicrobial drugs are used as very effective treatments in many inflammatory and infectious skin diseases. However, there are growing concerns about the side effects of these therapies, especially during long-term use in relapsing or intractable diseases. Bee venom (BV) is an attractive alternative and complementary treatment because collective experiments and clinical reports show that BV exhibits anti-inflammatory, anti-apoptotic, anti-fibrotic, antibacterial, and antiviral effects. This review attempts to summarize the therapeutic applications of BV in skin diseases, including acne, alopecia, atopic dermatitis, melanoma, morphea, photoaging, psoriasis, wounds, wrinkles, and vitiligo. The killing effects of BV on skin disease-causing pathogens are also investigated. View this paper.
Previous Issue
Volume 11, June
Next Issue
Volume 11, August
We use cookies on our website to ensure you get the best experience. Read more about our cookies here.
Accept
We have just recently launched a new version of our website. Help us to further improve by taking part in this short 5 minute survey here. here.
Never show this again