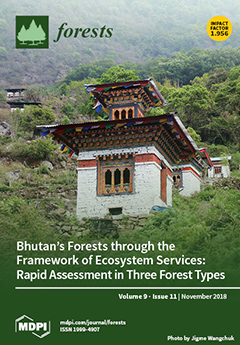 Cover Story (view full-size image): Some forest ecosystem services are steeped in culture and tradition. In this photo, a series of water-driven prayer wheels are situated over a stream on a mountainside in the Himalayan country of Bhutan. There, forests are recognized for their cultural, ecological and economic importance. An international team set out to test the hypothesis that forest ecosystem services undergird the well-being of the people in Bhutan. Starting with an assessment of the perceptions about forest services by people residing adjacent to or in forest areas, they found that awareness of forest ecosystem services was high among participants in the study. The provision of freshwater from these forests was the most cited service, but little evidence exists of this claim. Next steps in this research are to identify the links between forest condition and their services. Photo by Jigme Wangchuk. View this paper.
Previous Issue
Volume 9, October
Next Issue
Volume 9, December
We use cookies on our website to ensure you get the best experience. Read more about our cookies here.
Accept
We have just recently launched a new version of our website. Help us to further improve by taking part in this short 5 minute survey here. here.
Never show this again