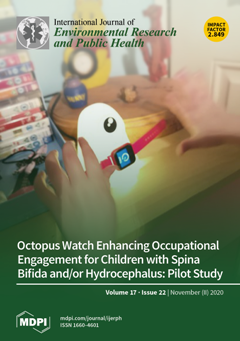 Cover Story (view full-size image): Children with spina bifida often experience difficulties with activities of daily living. The HeyJoy Octopus child-friendly smartwatch could be used to promote purposeful activity. This research investigates the effectiveness of the Octopus watch for children with spina bifida (<8 years). A four-phase mixed-methods pilot study engaged parents and children. Results indicated three out of four participants showed mean activity increase. One participant showed clear improvement. Inhibition decreased and there was a mean change in performance and satisfaction scores using the Canadian Occupational Performance Measure. The Photovoice narrative supports findings evidenced, suggesting improved daily routines. The Octopus watch is an innovative early intervention that can promote purposeful activities of daily living. Further research is required. View this paper.
Previous Issue
Volume 17, November-1
Next Issue
Volume 17, December-1
We use cookies on our website to ensure you get the best experience. Read more about our cookies here.
Accept
We have just recently launched a new version of our website. Help us to further improve by taking part in this short 5 minute survey here. here.
Never show this again