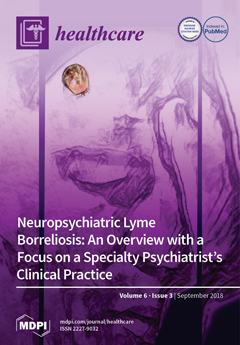 Cover Story (view full-size image): What begins as a tick bite can evolve into a mental illness. As we overcome fragmentation in science and medicine, we create new opportunities to understand, treat, assess, and diagnose mental illness. We are moving from a silo mentality that has impeded forward progress in the study of both Lyme borreliosis and mental illnesses to a more integrated approach. Sir William Osler, the father of American Medicine, said, “He who knows syphilis knows medicine.” It can now be said that He who knows Lyme borreliosis knows medicine, neurology, psychiatry, immunology, psychoimmunology, neurochemistry, ecology, epidemiology, entomology, law, politics, and ethics. View this paper
Previous Issue
Volume 6, June
Next Issue
Volume 6, December
We use cookies on our website to ensure you get the best experience. Read more about our cookies here.
Accept
We have just recently launched a new version of our website. Help us to further improve by taking part in this short 5 minute survey here. here.
Never show this again