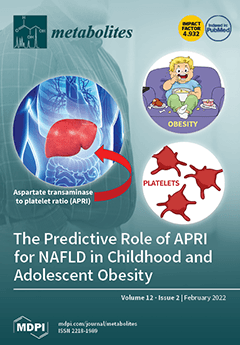 Cover Story (view full-size image): Aspartate transaminase to platelet ratio index (APRI) has been proposed as an easy-to-use biochemical marker in obese adults affected by NAFLD/NASH, while its value is still poorly known in obese children and adolescents so far. Based on the results of our study performed in a large (Italian) pediatric obese population, parameters such as BMI SDS, triglycerides, HOMA-IR, and APRI were positive predictors of NAFLD, while female sex was a negative predictor, with most of the prediction explained by APRI. Nevertheless, due to the missing correlations with metabolic syndrome and NAFLD severity, APRI seems to be a simple biochemical marker of liver injury rather than of NAFLD/NASH and, moreover, is endowed with a limited accuracy for the prediction/diagnosis of NAFLD. View this paper
Previous Issue
Volume 12, January
Next Issue
Volume 12, March
We use cookies on our website to ensure you get the best experience. Read more about our cookies here.
Accept
We have just recently launched a new version of our website. Help us to further improve by taking part in this short 5 minute survey here. here.
Never show this again