Environmental Metabolomics Promises and Achievements in the Field of Aquatic Ecotoxicology: Viewed through the Pharmaceutical Lens
Previous Article in Special Issue

Sphingolipids constitute a complex class of bioactive lipids with diverse structural and functional roles in neural tissue. Lipidomic techniques continue to provide evidence for their association in neurological diseases, including Parkinson’s disease (PD) and Lewy body disease (LBD). However, prior studies have primarily focused on biological tissues outside of the basal ganglia, despite the known relevancy of this brain region in motor and cognitive dysfunction associated with PD and LBD. Therefore electrospray ionization high resolution mass spectrometry was used to analyze levels of sphingolipid species, including ceramides (Cer), dihydroceramides (DHC), hydoxyceramides (OH-Cer), phytoceramides (Phyto-Cer), phosphoethanolamine ceramides (PE-Cer), sphingomyelins (SM), and sulfatides (Sulf) in the caudate, putamen and globus pallidus of PD (n = 7) and LBD (n = 14) human subjects and were compared to healthy controls (n = 9). The most dramatic alterations were seen in the putamen, with depletion of Cer and elevation of Sulf observed in both groups, with additional depletion of OH-Cer and elevation of DHC identified in LBD subjects. Diverging levels of DHC in the caudate suggest differing roles of this lipid in PD and LBD pathogenesis. These sphingolipid alterations in PD and LBD provide evidence for biochemical involvement of the neuronal cell death that characterize these conditions. View Full-Text
Keywords: ceramide; dihydroceramide; sphingomyelin; sulfatide; sphingolipid; alpha synuclein; striatum; globus pallidus ceramide; dihydroceramide; sphingomyelin; sulfatide; sphingolipid; alpha synuclein; striatum; globus pallidus
►▼ Show Figures 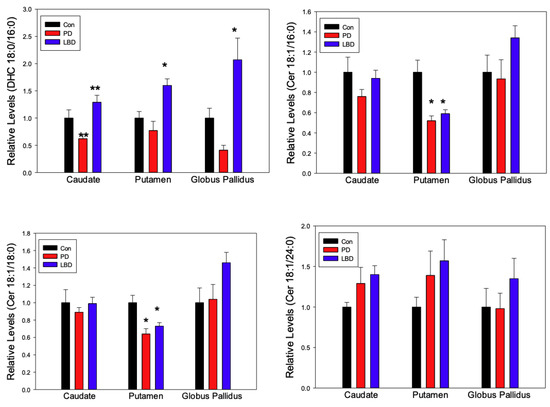