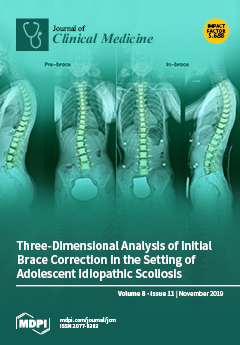 Cover Story (view full-size image): Adolescent idiopathic scoliosis (AIS) is a three-dimensional deformity which necessitates a tridimensional management. Bracing is considered the mainstay for nonoperative treatment for mild AIS. A rigorous understanding of initial three-dimensional spinal behavior in the context of bracing is important. This study retrospectively investigated the immediate 3D impact of Chêneau-type brace. Thirty-eight patients with AIS undergoing bracing were included and stratified according to their structural curve topography into thoracic, thoracolumbar, and lumbar groups. 3D reconstruction of the spine using biplanar stereoradiography software with and without the brace was performed. The results from this exploratory study could shed some light on the initial 3D spinal behavior in the context of bracing and may be beneficial for treating physicians and brace makers. View this paper
Previous Issue
Volume 8, October
Next Issue
Volume 8, December
We use cookies on our website to ensure you get the best experience. Read more about our cookies here.
Accept
We have just recently launched a new version of our website. Help us to further improve by taking part in this short 5 minute survey here. here.
Never show this again