Submit to Minerals Review for Minerals 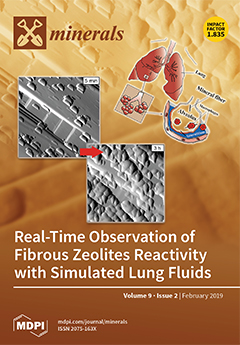 Cover Story (view full-size image): The inhalation of fibrous erionite has been linked to malignant mesothelioma, while no data have been reported for offretite, a similar zeolite. In this paper, the interaction of erionite and offretite surfaces with two simulated lung fluids (ALF and Gamble’s solution) was investigated by means of in situ atomic force microscopy (AFM). In ALF, the dissolution of the erionite and offretite surfaces and the removal of the particles attached to the crystal faces was detected. In contrast, the growth of a layer of a few tens of nanometers on the surface of both zeolites was observed in Gamble’s solution. View this paper
Previous Issue
Volume 9, January
Next Issue
Volume 9, March
We use cookies on our website to ensure you get the best experience. Read more about our cookies here.
Accept
We have just recently launched a new version of our website. Help us to further improve by taking part in this short 5 minute survey here. here.
Never show this again