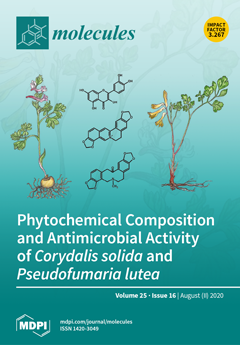 Cover Story (view full-size image): Corydalis solida Clairv. and Pseudofumaria lutea Borkh. (synonym Corydalis lutea DC.) from the Papaveraceae subfamily Fumarioideae, are two representative species of their genera. The taxonomic relationships within this subfamily are complex and we need more data on their phytochemical composition that can contribute to understanding their chemophenetic and phytomedicinal importance. The LC-MS analysis revealed striking differences in alkaloid and other metabolites profiles between both species, supporting their taxonomic separation into two genera. Moreover, the high content of coptisine and quercetin in P.lutea and its efficacy against pathogenic bacteria and fungi make this species a promising material with significant potential in pharmacotherapy. View this paper.
Previous Issue
Volume 25, August-1
Next Issue
Volume 25, September-1
We use cookies on our website to ensure you get the best experience. Read more about our cookies here.
Accept
We have just recently launched a new version of our website. Help us to further improve by taking part in this short 5 minute survey here. here.
Never show this again