Cholangiocarcinoma is a primary malignancy of the biliary tract characterized by late and unspecific symptoms, unfavorable prognosis, and few treatment options. The advent of next-generation sequencing has revealed potential targetable or actionable molecular alterations in biliary tumors. Among several identified genetic alterations, the IDH1 mutation is arousing interest due to its role in epigenetic and metabolic remodeling. Indeed, some IDH1 point mutations induce widespread epigenetic alterations by means of a gain-of-function of the enzyme, which becomes able to produce the oncometabolite 2-hydroxyglutarate, with inhibitory activity on α-ketoglutarate-dependent enzymes, such as DNA and histone demethylases. Thus, its accumulation produces changes in the expression of several key genes involved in cell differentiation and survival. At present, small-molecule inhibitors of IDH1 mutated enzyme are under investigation in preclinical and clinical phases as promising innovative treatments for IDH1-mutated intrahepatic cholangiocarcinomas. This review examines the molecular rationale and the results of preclinical and early-phase studies on novel pharmacological agents targeting mutant IDH1 in cholangiocarcinoma patients. Contextually, it will offer a starting point for discussion on combined therapies with metabolic and epigenetic drugs, to provide molecular support to target the interplay between metabolism and epigenetics, two hallmarks of cancer onset and progression. View Full-Text
Keywords: intrahepatic cholangiocarcinoma; isocitrate dehydrogenase; 2-hydroxyglutarate; IDH1 inhibitors intrahepatic cholangiocarcinoma; isocitrate dehydrogenase; 2-hydroxyglutarate; IDH1 inhibitors
►▼ Show Figures 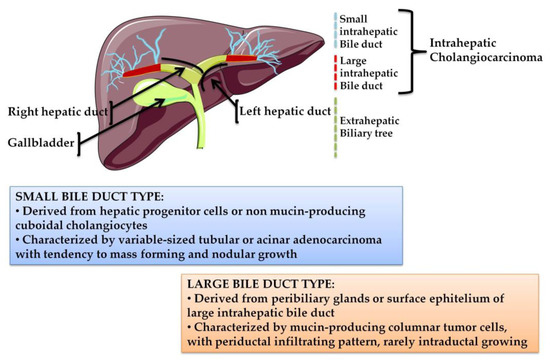