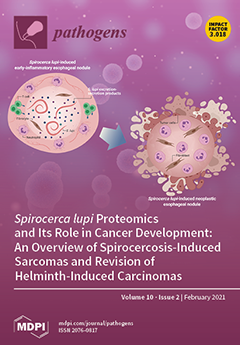 Cover Story (view full-size image): Spirocerca lupi is a parasitic nematode that induces a myriad of clinical manifestations in canids and in 25% of infections leads to the formation of sarcomas. The description of the protein composition of the excretory and secretory products of S. lupi (Sl-ESP) has shed light on its possible interactions with the host environment, including migration within the host and mechanisms of immunomodulation. Despite this, the process by which S. lupi induces cancer in the dog remains poorly understood. We propose that sustained inflammatory responses in the dog tissue produced in response to the release of Sl-ESP homologous to other carcinogenic worms promote chronic inflammation and tissue damage and may also dampen effective antitumor immune responses in the malignant phase by affecting tumor antigen cross-presentation. View this paper
Previous Issue
Volume 10, January
Next Issue
Volume 10, March
We use cookies on our website to ensure you get the best experience. Read more about our cookies here.
Accept
We have just recently launched a new version of our website. Help us to further improve by taking part in this short 5 minute survey here. here.
Never show this again