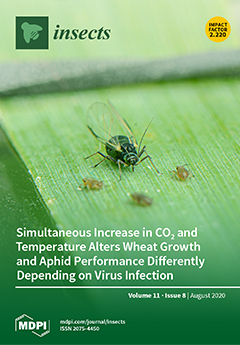 Cover Story (view full-size image): Climate change can alter pest and disease pressure and therefore impact future food security. The effects of elevated CO2 and temperature on the interactions among wheat, Barley yellow dwarf virus, and its aphid vector Rhopalosiphum padi were evaluated. Elevated CO2 and temperature conditions increased wheat growth, biomass, and C:N ratio but decreased aphid fecundity and development time. However, virus infection reduced wheat growth and increased aphid fecundity and development time. Regardless of virus infection, aphid growth rates remained unchanged. Aphids will likely continue to have significant importance in the future and this, together with earlier and more distinct virus symptomatology, can have consequences on virus transmission, disease epidemiology, wheat yield, and quality. View this paper.
Previous Issue
Volume 11, July
Next Issue
Volume 11, September
We use cookies on our website to ensure you get the best experience. Read more about our cookies here.
Accept
We have just recently launched a new version of our website. Help us to further improve by taking part in this short 5 minute survey here. here.
Never show this again