This paper reports the design, fabrication and performance of MEMS-based piezoelectric bidirectional conveyors featuring 3D printed legs, driven by linear travelling waves (TW). The structures consisted of an aluminium–nitride (AlN) piezoelectric film on top of millimetre-sized rectangular thin silicon bridges and two electrode patches. The position and size of the patches were analytically optimised for TW generation in three frequency ranges: 19, 112 and 420 kHz, by the proper combination of two contiguous flexural modes. After fabrication, the generated TW were characterized by means of Laser–Doppler vibrometry to obtain the relevant tables of merit, such as the standing wave ratio and the average amplitude. The experimental results agreed with the simulation, showing the generation of a TW with an amplitude as high as 6 nm/V and a standing wave ratio as low as 1.46 for a device working at 19.3 kHz. The applicability of the fabricated linear actuator device as a conveyor was investigated. Its kinetic performance was studied with sliders of different mass, being able to carry a 35 mg silicon slider, 18 times its weight, with 6 V of continuous sinusoidal excitation and a speed of 0.65 mm/s. A lighter slider, weighting only 3 mg, reached a mean speed of 1.7 mm/s at 6 V. In addition, by applying a burst sinusoidal excitation comprising 10 cycles, the TW generated in the bridge surface was able to move a 23 mg slider in discrete steps of 70 nm, in both directions, which is a promising result for a TW piezoelectric actuator of this size. View Full-Text
Keywords: travelling wave; bidirectional linear motion; conveyor; piezoelectric; AlN; MEMS travelling wave; bidirectional linear motion; conveyor; piezoelectric; AlN; MEMS
►▼ Show Figures 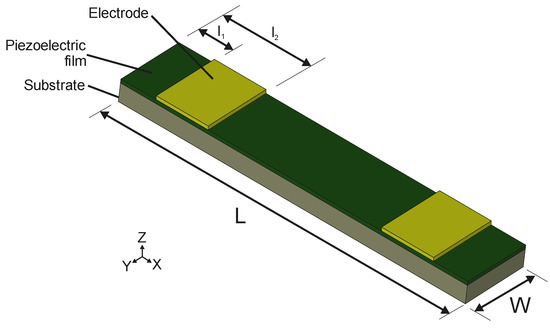