Background: Within Cambodia, micronutrient deficiencies continue to be prevalent in vulnerable groups, such as women and children. Fortification of staple foods such as rice could be a promising strategy for Cambodia to improve micronutrient status. Objective: Our objective was to investigate the impact of multiple-micronutrient fortified rice (MMFR), distributed through a World Food Program school-meals program (WFP-SMP) on serum zinc concentrations and folate status in a double-blind, cluster-randomized, placebo-controlled trial. Methods: Sixteen schools were randomly assigned to receive one of three different types of extruded-fortified rice (UltraRice Original (URO), UltraRice New (URN), or NutriRice) or unfortified rice (placebo) six days a week for six months. A total of 1950 schoolchildren (6–16 years old) participated in the study. Serum zinc (all groups) and folate (only in NutriRice and placebo group) concentrations were assessed from morning non-fasting antecubital blood samples and were measured at three time points (baseline and after three and six months). Results: After six months of intervention, serum zinc concentrations were significantly increased in all fortified rice group compared to placebo and baseline (0.98, 0.85 and 1.40 µmol/L for URO, URN and NutriRice, respectively) (interaction effect: p < 0.001 for all). Children in the intervention groups had a risk of zinc deficiencies of around one third (0.35, 039, and 0.28 for URO, URN, and NutriRice, respectively) compared to the placebo (p < 0.001 for all). The children receiving NutriRice had higher serum folate concentrations at endline compared to children receiving normal rice (+2.25 ng/mL, p = 0.007). Conclusions: This study showed that the high prevalence of zinc and folate deficiency in Cambodia can be improved through the provision of MMFR. As rice is the staple diet for Cambodia, MMFR should be considered to be included in the school meal program and possibilities should be explored to introduce MMFR to the general population. View Full-Text
Keywords: fortified rice; micronutrient; deficiency; zinc; school children; Cambodia fortified rice; micronutrient; deficiency; zinc; school children; Cambodia
►▼ Show Figures 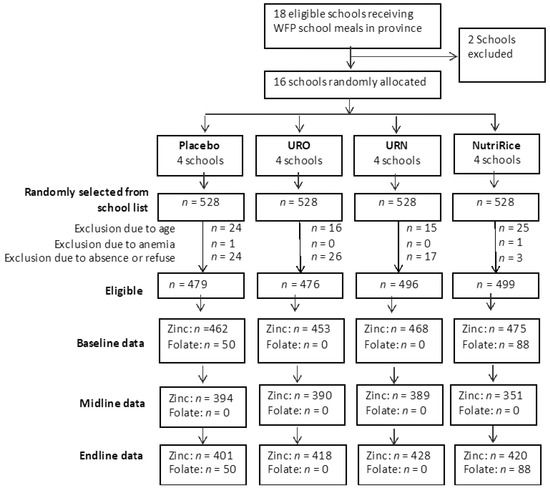