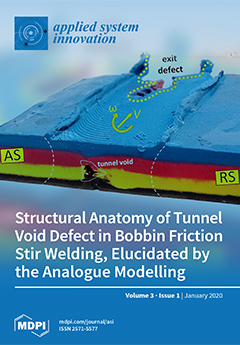 Cover Story (view full-size image): Bobbin friction stir welding (BFSW) appears to be a solid joining process by the frictional heat combined with high plastic deformation during the rotation and movement of the bobbin tool. According to the mechanics of material during the plastic deformation process, the internal material flow regimes can explain the flow failure and the subsequent formation of the weld defects. In this paper, the BFSW welding process was simulated on a layered plasticine analogue, compared to aluminum plates. The flow visualization in the analogue model showed a high possibility for a continuous channeled discontinuity, like a tunnel-shaped void defect. View this paper
Previous Issue
Volume 2, December
Next Issue
Volume 3, June
We use cookies on our website to ensure you get the best experience. Read more about our cookies here.
Accept
We have just recently launched a new version of our website. Help us to further improve by taking part in this short 5 minute survey here. here.
Never show this again