The shelf-life extension implicates the reduction of food waste. Plant polyphenols can have a crucial role in the shelf-life extension of foods. Olive leaf extract (OLE) is rich in phenolic compounds such as oleuropein, which is well-known for its antioxidant properties. Physico-chemical, microbiological and sensory aspects of non-thermally stabilized olive-based pâté fortified with OLE at concentrations of 0.5 (EX0.5) and 1 mg kg−1 (EX1) were investigated. These samples were compared with olive-based pâté fortified with the synthetic antioxidant BHT (butylated hydroxytoluene) and with a control sample (CTR) without antioxidants. No sensory defects were perceived in all samples, even if a more intense typical olive flavour was perceived in samples containing OLE compared to those containing BHT and CTR. This result was confirmed by significantly higher levels of 2-methylbutanal and 3-methylbutanal in samples containing OLE compared to CTR and BHT. Moreover, the main microbial groups registered a significant loss of 0.5–1 logarithmic cycles in samples containing OLE, especially in EX1. The results of the present study indicate the potentiality of using OLE as natural preservatives in non-thermally stabilized olive-based pâté, since some spoilage-related microbial groups were negatively affected by the addition of OLE at the highest concentration.
Keywords: olive leaves; waste; bioactive compounds; shelf-life; antimicrobial properties; acceptability olive leaves; waste; bioactive compounds; shelf-life; antimicrobial properties; acceptability

Shelf-life is defined as a finite length of time, after manufacture and packaging, during which the food product retains at a required level of quality acceptable for consumption. Shelf-life is a function of time, environmental factors and susceptibility of product to quality changes [1]. Physico-chemical and biological changes that take place in the food chain are involved in product deterioration. Generally, the effect of these changes might compromise several aspects of foods such as nutritional, microbiological and sensory quality. In the world, 32% of food is generally lost or wasted, as estimated by the Food and Agriculture Organization of the United (FAO). Global quantitative food losses and waste per year are roughly 30% for cereals, 40–50% for root crops, fruits and vegetables, 20% for oil seeds, meat and dairy and35% for fish [2]. Moreover, throwing food away implicates economic and environmental issues [3]. Thus, the possibility of using these wastes to obtain ingredients for the food industry could represent a significant step towards maintaining environmental balance.
During the last years, technological developments such as new packaging materials have been developed for food preservation to meet growing consumer demands of safe and perishable food products [4]. Modified atmosphere packaging (MAP) or synthetic antioxidants, such as butylated hydroxyanisole (BHA), butylated-hydroxytoluene (BHT), propyl gallate (PG), and tert-butylhydroquinone (TBHQ), represent efficient additives aimed at extending the shelf-life of foods. However, different studies revealed that these compounds are involved in many health issues, including cancer and carcinogenesis, causing a general consumer rejection of synthetic food additives [5,6]. Consequently, there is an increasing trend among food scientists to replace these synthetic preservatives with natural ones (herbal and spice extracts) which are supposed to be safer and may also add flavor [7]. Some studies have been carried out on natural antimicrobials, with a broad spectrum of activities, that can be used to extend the shelf-life of perishable foods [8]. The extracts from vegetable matrices, such as agri-food chain wastes and by-products, rich in polyphenols have been reported as good substitutes to extend the shelf-life of different food products [9].
Olive leaves are produced in high amounts in the olive oil industries (10% of the total weight of the olives) and accumulate during pruning of olive trees [10]. The most abundant phenolic component of olive leaves extract (OLE) is oleuropein [11], which exerts an in vitro inhibitory effect against many foodborne pathogens such as Staphylococcus aureus, E. coli, Salmonella spp., and L. monocytogenes and could be suitable for use in the food industry as natural preservatives [12]. In fact, several studies have reported the application of OLE to retard refined oil oxidative rancidity [13,14,15]; to increase the nutritional value of table olives [16,17]; to enhance the quality and shelf-life of cooked meat products [18,19], fresh seafood products [20] and bakery products [21].
The scientific literature contains no information regarding the use of OLE as a functional ingredient to extend the shelf-life of ready-to-use vegetable products, or as antimicrobial extract in the preparation and storage of minimally or non-thermally treated vegetable products. It is well known that the thermal treatment causes a reduction of the quality of foods in terms of colour, nutritive value and flavor [22].
Among non-thermally stabilized products, olive-based pâté is a gourmet product of Mediterranean tradition whose characteristics essentially depends both on the quality level of major ingredients used in their production and on technological process [23]. This product is usually stored in MAP at refrigerated conditions. In this framework, the aim of this work was to evaluate the effect of olive leaf extract addition on physico-chemical, microbiological and sensory aspects of non-thermally stabilized olive-based pâté during storage, making a comparison with the synthetic antioxidant BHT.

Greek method fermented table olives (cv. Termite di Bitetto) were provided by a local farm in Modugno (Apulia, Italy); extra-virgin olive oil (cv. Coratina) came from an olive oil manufacturer in Andria (Apulia, Italy). Olive leaves (Olea europaea L., cultivar Coratina) were collected, processed and the polyphenols extraction was carried out according to the method described by Difonzo et al. [12]. and it had a total phenol content of 190 mg g−1 of dry matter and an antioxidant activity of about 738 µmol Trolox equivalents (TE) dry weight g−1.

2.3. Formulation and Manufacture of Olive-Based Pâté

The measurement of pH was carried out according to Cosmai et al. (2017) [24]. Headspace gas samples were withdrawn with a gas-tight syringe and the concentrations of O2 and CO2 were monitored with O2 and CO2 gas analyzers (CheckMate 3, DanSensor, Ametek, Milan).
Colourimetric readings were taken using a Minolta Chroma meter CR-300 (Osaka, Japan) with a CR 300 measurement head and CIE Standard Illuminant D65. The analysis was performed by placing the sample in a transparent quartz container. Lightness (L*), redness (a*, ±red-green), and yellowness (b*, ±yellow-blue) were determined as colour coordinates.
For volatile compounds determination, the sample (1.00 ± 0.05 g) was weighed into 20-mL vials, sealed with a screw top aluminium cap and pierceable butyl rubber septa, and submitted to the SPME/GC-MS as reported in Caponio et al. [25].

A trained panel of ten judges performed the sensory assessment. Quality attributes of colour (green colour) and odor (olive flavour) were evaluated using a 9-box scale labelled on the top with “dislike very much”, in the middle “neither like nor dislike” and on the bottom “like very much”, as also reported by Fabiano et al. [26]. Random samples were evaluated in individual plastic cups.

All the analytical determinations were carried on three independent batches for each sampling time and type of antioxidant used. Analysis of variance (one-way ANOVA) and the Tukey’s test were performed; the significant differences among the values were determined at p ≤ 0.05. All data were processed by the XLStat software (Addinsoft SARL, New York, NY, USA). Permutation analysis was also performed for the microbiological data using PermutMatrix [27].

The results of sensory evaluation of olive-based pâté showed that no sensory defects for all the samples were perceived, even if a greater typical olive flavour was present in samples added with OLE than in BHT and CTR. These results were confirmed by a significantly higher level of 2-methylbutanal and 3-methylbutanal in the samples added with OLE than CTR and BHT. Moreover, the main microbial groups registered a significant loss of 0.5–1 logarithmic cycles in samples added of OLE, especially when it was used at the highest concentration (1.0 g kg−1). To conclude, the results of the present study indicate the high potential of using OLE as natural preservative in non-thermally stabilized olive-based pâté, since some spoilage-related microbial groups were negatively affected by the addition of OLE at the highest concentration. 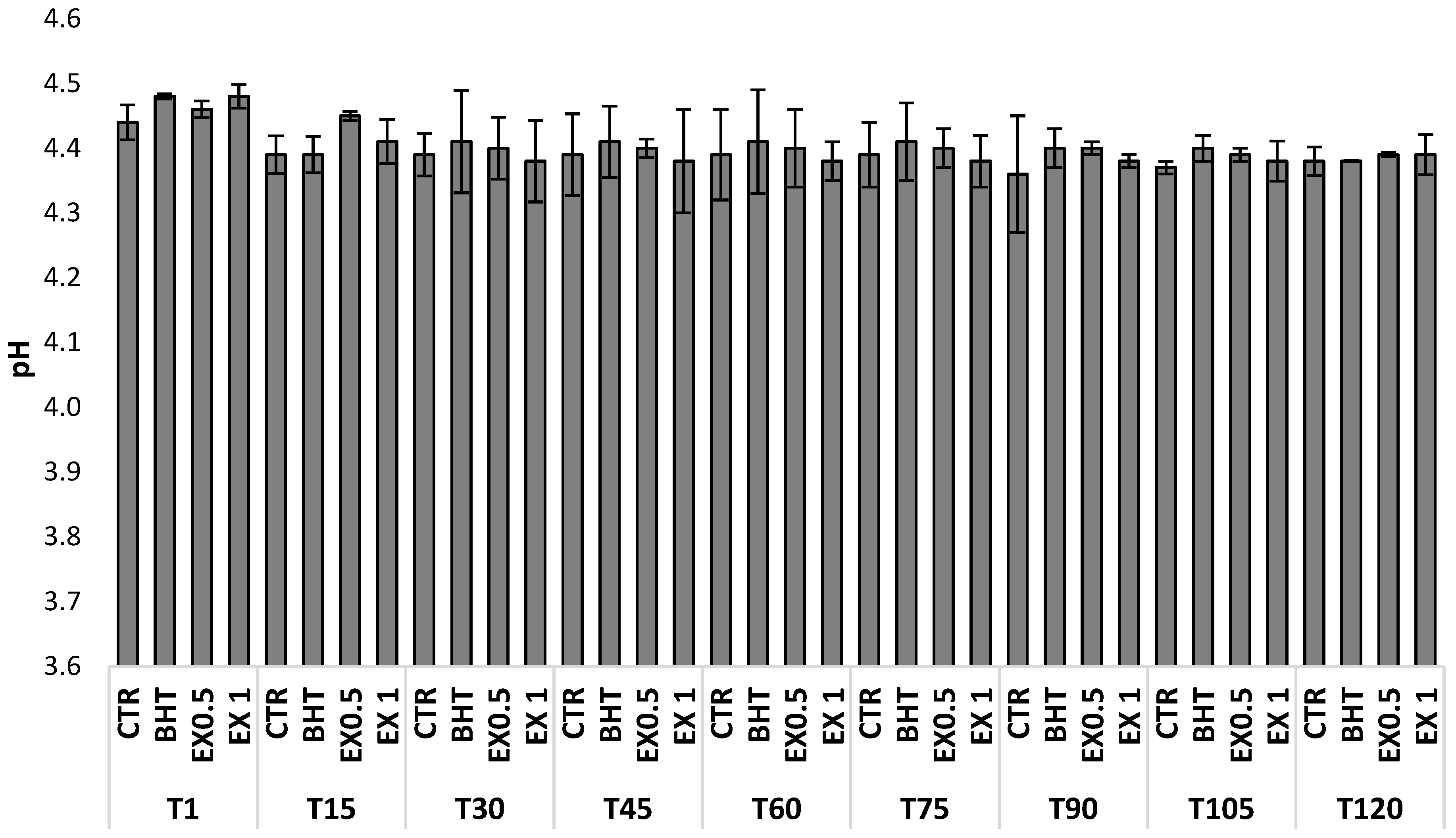