Administration of Ligilactobacillus salivarius MP101 in an Elderly Nursing Home during the COVID-19 Pandemic: Immunological and Nutritional Impact
Previous Article in Journal

Many lactic acid bacteria (LAB) produce metabolites with applications in the food industry, such as dextran-type exopolysaccharides (EPS) and riboflavin (vitamin B2). Here, 72 bacteria were isolated from sourdoughs made by Spanish bread-makers. In the presence of sucrose, colonies of 22 isolates showed a ropy phenotype, and NMR analysis of their EPS supported that 21 of them were dextran producers. These isolates were identified by their random amplified polymorphic DNA (RAPD) patterns and their rrs and pheS gene sequences as LAB belonging to four species (Weissella cibaria, Leuconostoc citreum, Leuconostoc falkenbergense and Leuconostoc mesenteroides). Six selected strains from the Leuconostoc (3) and Weissella (3) genera grew in the absence of riboflavin and synthesized vitamin B2. The EPS produced by these strains were characterized as dextrans by physicochemical analysis, and the L. citreum polymer showed an unusually high degree of branching. Quantification of the riboflavin and the EPS productions showed that the W. cibaria strains produce the highest levels (585–685 μg/and 6.5–7.4 g/L, respectively). Therefore, these new LAB strains would be good candidates for the development of fermented foods bio-fortified with both dextrans and riboflavin. Moreover, this is the first report of riboflavin and dextran production by L. falkenbergense. View Full-Text
Keywords: lactic acid bacteria; dextrans; riboflavin; sourdoughs lactic acid bacteria; dextrans; riboflavin; sourdoughs
►▼ Show Figures 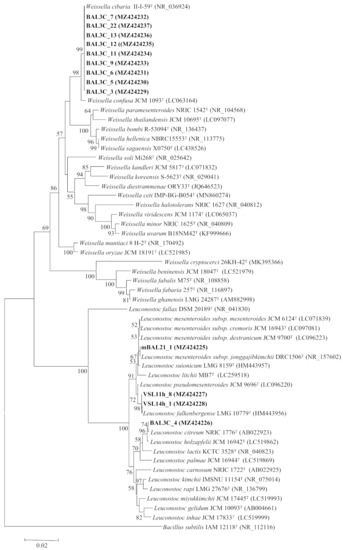 Paloma López
https://orcid.org/0000-0001-8755-8952
Zoom | Orient | As Lines | As Sticks | As Cartoon | As Surface | Previous Scene | Next Scene
We use cookies on our website to ensure you get the best experience. Read more about our cookies here.
Accept
We have just recently launched a new version of our website. Help us to further improve by taking part in this short 5 minute survey here. here.
Never show this again