Identification of Bioactive Phytochemicals in Mulberries

Following cell division, fruit growth is characterized by both expansion through increases in cell volume and biomass accumulation in cells. Fruit growth is limited by carbon starvation; however, the mechanism controlling fruit growth under restricted carbohydrate supply is poorly understood. In a previous study using red-fleshed kiwifruit, we showed that long-term carbon starvation had detrimental effects on carbohydrate, anthocyanin metabolism, and fruit growth. To elucidate the mechanisms underlying the reduction in fruit growth during kiwifruit development, we integrated phytohormone profiling with transcriptomic and developmental datasets for fruit under high or low carbohydrate supplies. Phytohormone profiling of the outer pericarp tissue of kiwifruit showed a 6-fold reduction in total cytokinin concentrations in carbon-starved fruit, whilst other hormones were less affected. Principal component analysis visualised that cytokinin composition was distinct between fruit at 16 weeks after mid bloom, based on their carbohydrate supply status. Cytokinin biosynthetic genes (IPT, CYP735A) were significantly downregulated under carbon starvation, in agreement with the metabolite data. Several genes that code for expansins, proteins involved in cell wall loosening, were also downregulated under carbon starvation. In contrast to other fleshy fruits, our results suggest that cytokinins not only promote cell division, but also drive fruit cell expansion and growth in kiwifruit. View Full-Text
Keywords: cytokinin; fruit expansion; kiwifruit; phytohormone cytokinin; fruit expansion; kiwifruit; phytohormone
►▼ Show Figures 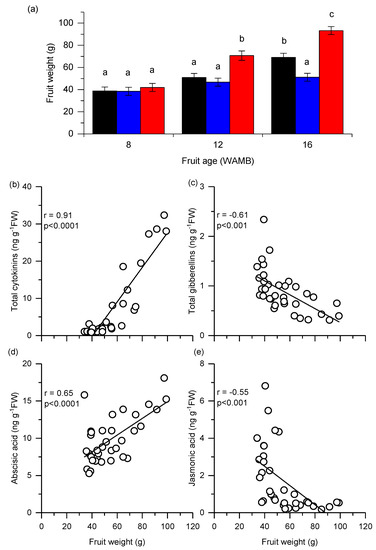