Tungsten films were prepared by DC magnetron sputtering using glancing angle deposition with a constant deposition angle α = 80°. A first series of films was obtained at a constant pressure of 4.0 × 10−3 mbar with the films’ thickness increasing from 50 to 1000 nm. A second series was produced with a constant thickness of 400 nm, whereas the pressure was gradually changed from 2.5 × 10−3 to 15 × 10−3 mbar. The A15 β phase exhibiting a poor crystallinity was favored at high pressure and for the thinner films, whereas the bcc α phase prevailed at low pressure and for the thicker ones. The tilt angle of the columnar microstructure and fanning of their cross-section were tuned as a function of the pressure and film thickness. Electrical resistivity and surface elastic wave velocity exhibited the highest anisotropic behaviors for the thickest films and the lowest pressure. These asymmetric electrical and elastic properties were directly connected to the anisotropic structural characteristics of tungsten films. They became particularly significant for thicknesses higher than 450 nm and when sputtered particles were mainly ballistic (low pressures). Electronic transport properties, as well as elastic wave propagation, are discussed considering the porous architecture changes vs. film thickness and pressure.
Keywords: sputtering; GLAD; tilted columns; anisotropy; electrical resistivity; elastic wave propagation sputtering; GLAD; tilted columns; anisotropy; electrical resistivity; elastic wave propagation
►▼ Show Figures 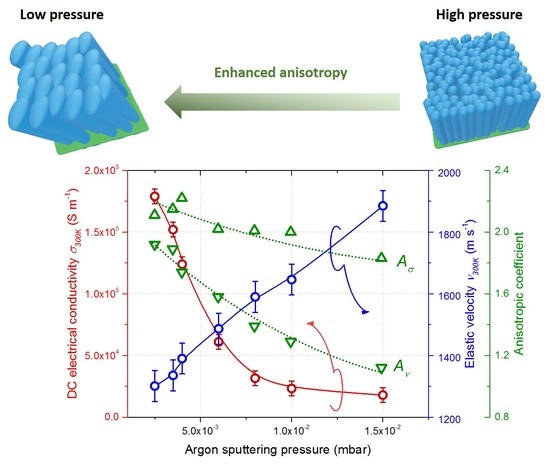