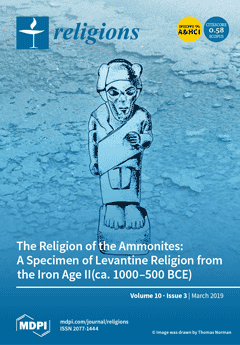 Cover Story (view full-size image): The religious traditions of the ancient Ammonites who lived around Amman, Jordan during the Iron Age II (ca. 1000–500 BCE) are a subset of the broader religious tradition of the Iron Age II Levant. One distinguishing feature of Ammonite religion is the state god Milkom, whose name is probably an epithet for the god ʾEl, and who appears to be represented in a tradition of stone sculptures that have been found around Amman. The rest of the non-physical realm was understood to be inhabited by gods, goddesses, a variety of other non-human beings, and dead ancestors. Also visible in the extant evidence is a blending of local and foreign elements, especially those from Mesopotamia. Unique in this respect is the probable temple to the moon-god at Rujm al-Kursi, which most likely reflects a local tradition of lunar worship influenced by the iconography of the Mesopotamian moon-god Sîn. View this paper
Previous Issue
Volume 10, February
Next Issue
Volume 10, April
We use cookies on our website to ensure you get the best experience. Read more about our cookies here.
Accept
We have just recently launched a new version of our website. Help us to further improve by taking part in this short 5 minute survey here. here.
Never show this again