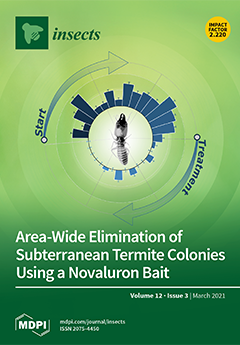 Cover Story (view full-size image): Subterranean termites cause damage to man-made structures around the world and are continuing to invade new areas. Current practices for controlling termites generally target a single colony at a time, and, although effective in most instances, never reduce the overall termite pressure. An area-wide approach to pest management could offer a way of controlling termites at the population level. We tracked individual termite colonies within two field plots, before and after the introduction of termite baits, to assess the fate of these colonies and to determine if a termite-free area could be maintained with continued baiting. This approach was successful in significantly reducing the overall termite population, as well as eliminating both well-established and newly invading colonies. View this paper.
Previous Issue
Volume 12, February
Next Issue
Volume 12, April
We use cookies on our website to ensure you get the best experience. Read more about our cookies here.
Accept
We have just recently launched a new version of our website. Help us to further improve by taking part in this short 5 minute survey here. here.
Never show this again