The Asian tiger mosquito Aedes albopictus (Skuse, 1894) is an invasive species responsible for the transmission of arboviruses such as dengue, Zika and chikungunya. The rapid expansion of this species globally is the result of a lack of effective control methods. In this context, the sterile insect technique (SIT) is an emerging tool for controlling mosquito populations. The Agriculture Department of the Valencian Region (Spain) is promoting a pilot project to evaluate the efficacy of the sterile insect technique as part of an integrated vector management program against A. albopictus. From 2018 to 2020, sterile male releases were carried out in two pilot sites, releasing more than 15 million sterile males over 80 ha. The present work describes the laboratory studies carried out to evaluate the performance of irradiated males to assess the feasibility of the SIT before release in the field, as well as the production and quality control parameters obtained in rearing activities. The obtained values in terms of production and quality control and the proposed rearing methodology can be useful for designing a medium-scale mosquito-rearing pipeline.

Aedes albopictus and Aedes aegypti are the main vectors of arboviral diseases such as dengue, Zika and chikungunya viruses. About a third of the world population is currently at risk of contracting Aedes-borne epidemics. In recent years, A. albopictus has drastically increased its distribution in many countries. In the absence of efficient mosquito vector control methods, the sterile insect technique (SIT) is presented as a very promising and environment-friendly control tool. The Agriculture Department of the Valencian Region is promoting an ongoing pilot project to evaluate the efficacy of an integrated vector management program (IVM) based on the use of the SIT as the main method of control. The laboratory studies for evaluating the entomological efficacy of SIT through the phased conditional testing process recommended by World Health Organization and the International Atomic Energy Agency (WHO-IAEA) are addressed. This study describes the routine operating procedures and quality control parameters for the medium-scale rearing of sterile male A. albopictus. More than 15 million sterile males have been produced and released in an area of 80 ha between 2018 and 2020. Of the initial L1 larvae, we recovered 17.2% of male pupae after sex sorting to be sterilized and released on the field, while the rest of the pupae remained available to maintain the rearing colony. The residual percentage of females after sex sorting was on average 0.17%. The obtained values in terms of production and quality control as well as the proposed rearing methodology can be useful for designing a medium-scale mosquito-rearing pipeline. View Full-Text
Keywords: SIT; vector control; insect production; mass rearing; dengue; Europe SIT; vector control; insect production; mass rearing; dengue; Europe
►▼ Show Figures 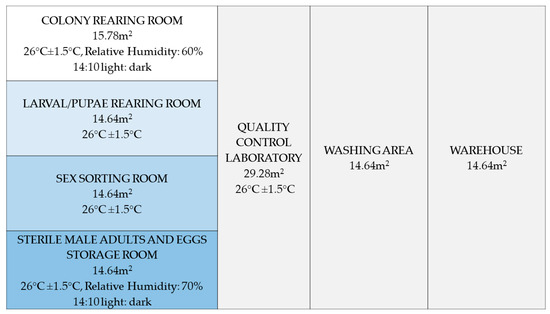