The hydrology of coastal lakes differs significantly from that of inland water bodies due to the influence of the neighboring sea. Observed climatic changes are expected to enhance the effect of the sea on coastal lake ecosystems, which makes research on sea–lake interactions even more significant. In this study, on the basis of maximum annual and monthly values of water level, dependencies among the water levels of six lakes located along the southern coast of the Baltic Sea in Poland, and the Baltic Sea water levels were analyzed. First, the Spearman rank correlation and the linear regression method were applied. Then, selected copulas were used to find joint distributions of the studied time series. In the next stage, the degrees of synchronous and asynchronous occurrences of maximum water levels in lakes and the sea were calculated. The study revealed that correlations between the maximum annual water levels in coastal lakes and in the Baltic Sea in the selected gauge stations were very strong and statistically significant. These results were confirmed by a synchronicity analysis carried out with the help of a copula function. The highest relationship was detected in the case of Lake Resko Przymorskie (correlation coefficient 0.86, synchronicity 75.18%), while the lowest were observed in Lakes Jamno (0.62 and 58.20%, respectively) and Bukowo (0.60 and 56.82%, respectively). The relation strength between maximum water levels of the sea and coastal lakes may increase in the future due to sea level rises caused by climate warming. View Full-Text
Keywords: time series analysis; coastal lakes; Baltic Sea; water level; Poland; copula; surface water time series analysis; coastal lakes; Baltic Sea; water level; Poland; copula; surface water
►▼ Show Figures 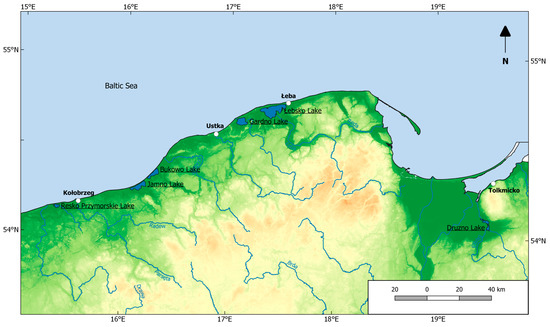