Estuaries are transitional environments with ideal conditions for port construction and navigation. They represent a challenge to hydrographic services due to the dynamics of the seabed and the tidal wave deformation. The bottom slope, the convergence of the channels, and the nonlinear effects produced by the bottom friction produce variation in both the tidal range and the location of the chart datum (CD). In this study, sea level data series obtained from the nodes of the mesh of a hydrodynamic model (virtual tide gauges) were used to calculate the harmonic constituents, form factor, asymmetry, and estuary type. The final chart datum surface, obtained from the hydrodynamic model, was used to determine the separation values between zones and also the number of tidal zones in an estuarine system. It was found that in a complex hydrodynamics scenario, the use of the ellipsoidal referenced surveying (ERS) method is more convenient than traditional tidal zoning survey. In the ERS method, once the CD model is complete, it must be attached to the ellipsoid directly. Finally, the variation of the CD in different scenarios (due to anthropogenic action) was assessed. View Full-Text
Keywords: tidal constituent; chart datum; uncertainty; estuary; hydrodynamic model; tide gauge tidal constituent; chart datum; uncertainty; estuary; hydrodynamic model; tide gauge
►▼ Show Figures 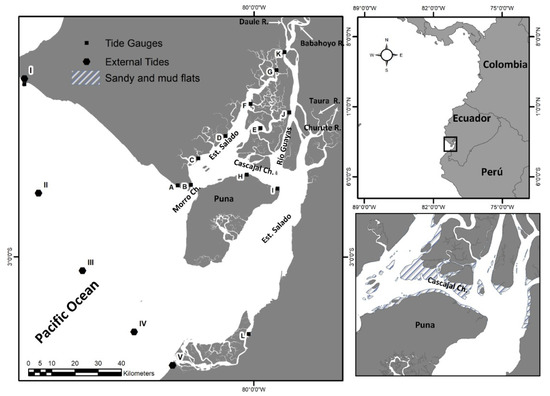 
Zapata C, Puente A, García A, García-Alba J, Espinoza J. The Use of Hydrodynamic Models in the Determination of the Chart Datum Shape in a Tropical Estuary. Water. 2019; 11(5):902.


Zapata, Carlos; Puente, Araceli; García, Andrés; García-Alba, Javier; Espinoza, Jorge. 2019. "The Use of Hydrodynamic Models in the Determination of the Chart Datum Shape in a Tropical Estuary." Water 11, no. 5: 902.