This study investigated how sporadic river datasets could be used to quantify temporal variations in the base flow index (BFI). The BFI represents the baseflow component of river flow which is often used as a proxy indicator for groundwater discharge to a river. The Bua catchment in Malawi was used as a case study, whereby the smoothed minima method was applied to river flow data from six gauges (ranging from 1953 to 2009) and the Mann-Kendall (MK) statistical test was used to identify trends in BFI. The results showed that baseflow plays an important role within the catchment. Average annual BFIs > 0.74 were found for gauges in the lower reaches of the catchment, in contrast to lower BFIs < 0.54 which were found for gauges in the higher reaches. Minimal difference between annual and wet season BFI was observed, however dry season BFI was >0.94 across all gauges indicating the importance of baseflow in maintaining any dry season flows. Long term trends were identified in the annual and wet season BFI, but no evidence of a trend was found in the dry season BFI. Sustainable management of the investigated catchment should, therefore, account for the temporal variations in baseflow, with special regard to water resources allocation within the region and consideration in future scheme appraisals aimed at developing water resources. Further, this demonstration of how to work with sporadic river data to investigate baseflow serves as an important example for other catchments faced with similar challenges. View Full-Text
Keywords: baseflow; base flow index; hydrograph; groundwater; Malawi baseflow; base flow index; hydrograph; groundwater; Malawi
►▼ Show Figures 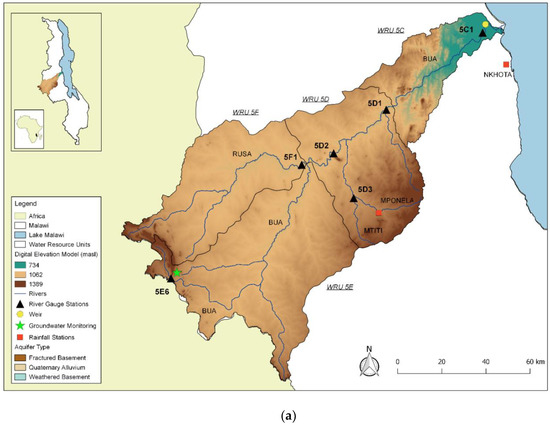