(1) Background. N-methyl d-aspartate (NMDA) ionotropic glutamate receptor (NMDAR), which is one of the main targets to combat Alzheimer’s disease (AD), is expressed in both neurons and glial cells. The aim of this paper was to assess whether the adenosine A2A receptor (A2AR), which is a target in neurodegeneration, may affect NMDAR functionality. (2) Methods. Immuno-histo/cytochemical, biophysical, biochemical and signaling assays were performed in a heterologous cell expression system and in primary cultures of neurons and microglia (resting and activated) from control and the APPSw,Ind transgenic mice. (3) Results. On the one hand, NMDA and A2A receptors were able to physically interact forming complexes, mainly in microglia. Furthermore, the amount of complexes was markedly enhanced in activated microglia. On the other hand, the interaction resulted in a novel functional entity that displayed a cross-antagonism, that could be useful to prevent the exacerbation of NMDAR function by using A2AR antagonists. Interestingly, the amount of complexes was markedly higher in the hippocampal cells from the APPSw,Ind than from the control mice. In neurons, the number of complexes was lesser, probably due to NMDAR not interacting with the A2AR. However, the activation of the A2AR receptors resulted in higher NMDAR functionality in neurons, probably by indirect mechanisms. (4) Conclusions. A2AR antagonists such as istradefylline, which is already approved for Parkinson’s disease (Nouriast® in Japan and Nourianz® in the US), have potential to afford neuroprotection in AD in a synergistic-like fashion. i.e., via both neurons and microglia. View Full-Text
Keywords: G-protein-coupled receptors; functional selectivity; microglia; neuroprotection; cognition; signaling G-protein-coupled receptors; functional selectivity; microglia; neuroprotection; cognition; signaling
►▼ Show Figures 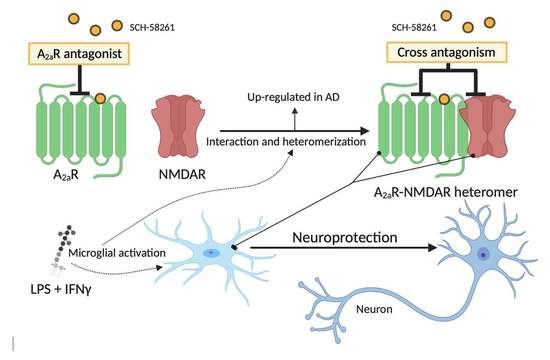