A Plant-Based High-Carbohydrate, Low-Fat Diet in Overweight Individuals in a 16-Week Randomized Clinical Trial: The Role of Carbohydrates
Next Article in Special Issue

Meat, Meat Products and Seafood as Sources of Energy and Nutrients in the Average Polish Diet
Previous Article in Journal

Eating meat is deeply entrenched in Western culture. It is often associated with wealth and a highly nutritional diet; and for many people it is also an established habit that is difficult to change. The second half of the 20th century was a period of rapid growth in meat consumption, which resulted in intensified meat production. At the same time, eating meat has recently become subject to criticism for health-related, environmental or humanitarian reasons. This review aims to signal the potential consequences of a change of diet or switching to diets that are rich/poor in certain ingredients on the functioning of the hormonal and nervous system, which translates into changes in mood and behavior. This paper discusses the psychological phenomena which underlie the difficulty of changing one’s food preferences and problems encountered while adding new products to the daily diet. Finally, this study summarizes the limitations of modifying eating habits that have resulted from established attitudes and habits. View Full-Text
Keywords: meat; protein; amino acids; phytoestrogens; digit ratio; autism; food neophobia meat; protein; amino acids; phytoestrogens; digit ratio; autism; food neophobia
►▼ Show Figures 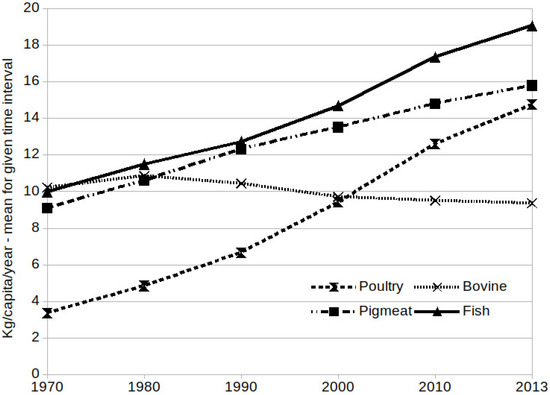