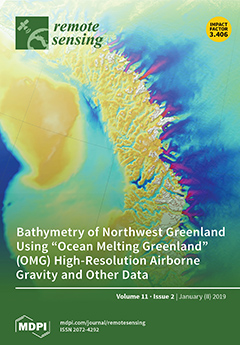 Cover Story (view full-size image): Widespread glacier acceleration has been linked to the warming of oceans around the periphery of Greenland, but glacier changes are difficult to fully explain due to a lack of detail on the bathymetry of the continental shelf and glacial fjords. Here, we employ high-resolution, airborne gravity data in combination with multibeam echo sounding data to infer the bathymetry of coastal Northwest Greenland for NASA's ‘Ocean Melting Greenland’ mission. The 3D inversion reveals a complex network of connected sea bed channels, not known previously, provide natural and varied pathways for Atlantic waters to reach the glaciers and melt them from below. This novel information helps better understand and model ice–ocean interactions along glacier margins. This study demonstrates that high-resolution gravity can complement ship mapping of bathymetry. View this paper.
Previous Issue
Volume 11, January-1
Next Issue
Volume 11, February-1
We use cookies on our website to ensure you get the best experience. Read more about our cookies here.
Accept
We have just recently launched a new version of our website. Help us to further improve by taking part in this short 5 minute survey here. here.
Never show this again