The In Vitro Bioactivity, Degradation, and Cytotoxicity of Polymer-Derived Wollastonite-Diopside Glass-Ceramics
Previous Article in Special Issue

Dose-response functions (DRFs) developed for the prediction of first-year corrosion losses of carbon steel and zinc (K1) in continental regions are presented. The dependences of mass losses on SO2 concentration, K = f([SO2]), obtained from experimental data, as well as nonlinear dependences of mass losses on meteorological parameters, were taken into account in the development of the DRFs. The development of the DRFs was based on the experimental data from one year of testing under a number of international programs: ISO CORRAG, MICAT, two UN/ECE programs, the Russian program in the Far-Eastern region, and data published in papers. The paper describes predictions of K1 values of these metals using four different models for continental test sites under UN/ECE, RF programs and within the MICAT project. The predictions of K1 are compared with experimental K1 values, and the models presented here are analyzed in terms of the coefficients used in the models. View Full-Text
Keywords: carbon steel; zinc; modeling studies; atmospheric corrosion carbon steel; zinc; modeling studies; atmospheric corrosion
►▼ Show Figures 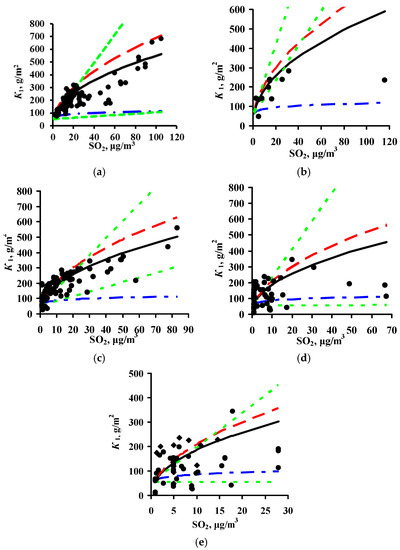