Halophiles and Their Biomolecules: Recent Advances and Future Applications in Biomedicine
Previous Article in Journal

Deep-Sea Fungi Could Be the New Arsenal for Bioactive Molecules

Growing microbial resistance to existing drugs and the search for new natural products of pharmaceutical importance have forced researchers to investigate unexplored environments, such as extreme ecosystems. The deep-sea (>1000 m below water surface) has a variety of extreme environments, such as deep-sea sediments, hydrothermal vents, and deep-sea cold region, which are considered to be new arsenals of natural products. Organisms living in the extreme environments of the deep-sea encounter harsh conditions, such as high salinity, extreme pH, absence of sun light, low temperature and oxygen, high hydrostatic pressure, and low availability of growth nutrients. The production of secondary metabolites is one of the strategies these organisms use to survive in such harsh conditions. Fungi growing in such extreme environments produce unique secondary metabolites for defense and communication, some of which also have clinical significance. Despite being the producer of many important bioactive molecules, deep-sea fungi have not been explored thoroughly. Here, we made a brief review of the structure, biological activity, and distribution of secondary metabolites produced by deep-sea fungi in the last five years. View Full-Text
Keywords: deep-sea; extreme; ecosystem; fungi; bioactive compounds; secondary metabolites deep-sea; extreme; ecosystem; fungi; bioactive compounds; secondary metabolites
►▼ Show Figures 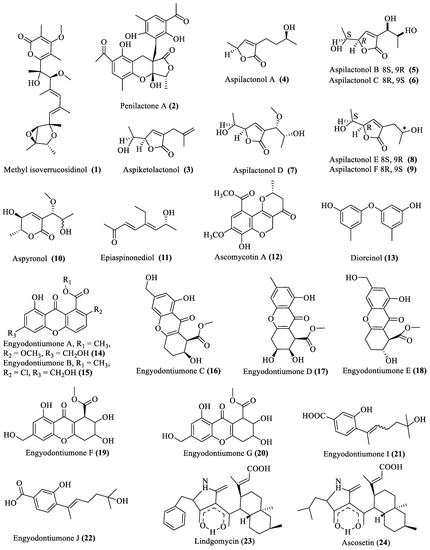