Seaweed Secondary Metabolites with Beneficial Health Effects: An Overview of Successes in In Vivo Studies and Clinical Trials
Previous Article in Special Issue

Lung cancer is one of the most common types of cancer, accounting for approximately 15% of all cancer cases worldwide. Apoptosis is the dominant defense mechanism against tumor development. The balance between pro- and antiapoptotic members of the Bcl-2 protein family can determine cellular fate. The venom of predatory marine snails Conus is estimated to have 100–400 toxins called conotoxins. The family of α-conotoxins is known to consist of selective antagonists of nicotinic acetylcholine receptors (nAChRs). Lung cancer cells overexpress several subunits of nAChRs and are considered as an excellent target for new anticancer drugs. We compared the cytotoxic effect of two synthetic peptides derived from Californiconus californicus, Cal14.1a, and Cal14.1b, which only differ by one amino acid in their sequence, and compared their proapoptotic balance by Bax and Bcl-2 mRNA expression. We determined the caspase-3 and -7 activation to demonstrate apoptosis induction. Results showed that Cal14.1a induces a high Bax/Bcl-2 ratio in H1299 (lung cancer cells). Although Cal14.1b has a cytotoxic effect on H1299 cells, reducing cell viability by 30%, it does not increase the Bax/Bcl-2 ratio, which could be explained by the Glu in the 15th residue, which is crucial for the ability of Cal14.1a to induce apoptosis. View Full-Text
Keywords: lung cancer; apoptosis; conotoxins; apoptosis; Bax/Bcl-2 ratio; caspases; structure alignment lung cancer; apoptosis; conotoxins; apoptosis; Bax/Bcl-2 ratio; caspases; structure alignment
►▼ Show Figures 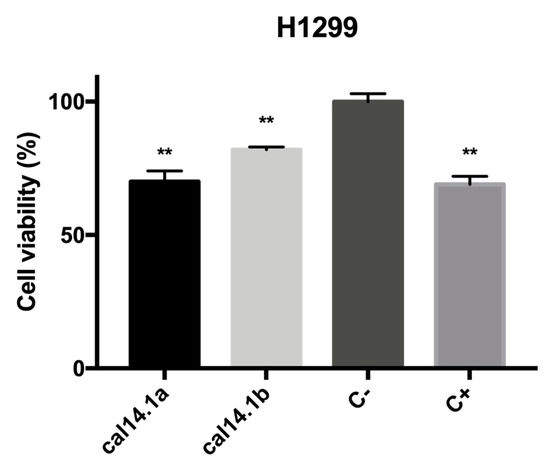