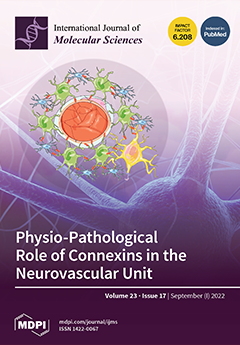 Cover Story (view full-size image): Connexin-based channels represent the physiological substrate of direct intercellular communication in living organisms, allowing the coordination of cellular activities and controlling cell growth, differentiation, and maintenance of tissue homeostasis. In the central nervous system (CNS), homeostasis is closely linked to the delicate balance of the microenvironment in which different cellular components coexist. The specific connexin signature of nerve cellular components represents a critical factor in the delicate physio-pathological balance. Connexin dysregulation is emerging as a detrimental cellular response to stressful stimuli or as an attempt to counteract disease progression. As such, detailed analysis of the role of connexin-based channels is of strategic importance for developing novel therapeutic approaches for CNS disease. View this paper
Previous Issue
Volume 23, August-2
Next Issue
Volume 23, September-2
We use cookies on our website to ensure you get the best experience. Read more about our cookies here.
Accept
We have just recently launched a new version of our website. Help us to further improve by taking part in this short 5 minute survey here. here.
Never show this again