Long Non-Coding RNAs in the Regulation of Gene Expression: Physiology and Disease

MicroRNAs play functional roles in the etiology of type 2 diabetes mellitus (T2DM) and complications, and extracellular microRNAs have attracted interest as potential biomarkers of these conditions. We aimed to identify a set of plasma microRNAs, which could serve as biomarkers of T2DM and complications in a mixed Israeli Arab/Jewish patient sample. Subjects included 30 healthy volunteers, 29 early-stage T2DM patients, and 29 late-stage T2DM patients with renal and/or vascular complications. RNA was isolated from plasma, and the levels of 12 candidate microRNAs were measured by quantitative reverse transcription and polymerase chain reaction (qRT-PCR). MicroRNA levels were compared between the groups and correlated to clinical measurements, followed by stepwise regression analysis and discriminant analysis. Plasma miR-486-3p and miR-423 were respectively up- and down-regulated in T2DM patients compared to healthy controls. MiR-28-3p and miR-423 were up-regulated in patients with complicated T2DM compared to early T2DM, while miR-486-3p was down-regulated. Combined, four microRNAs (miR-146a-5p, miR-16-2-3p, miR-126-5p, and miR-30d) could distinguish early from complicated T2DM with 77% accuracy and 79% sensitivity. In male patients only, the same microRNAs, with the addition of miR-423, could distinguish early from complicated T2DM with 83.3% accuracy. Furthermore, plasma microRNA levels showed significant correlations with clinical measurements, and these differed between men and women. Additionally, miR-183-5p levels differed significantly between the ethnic groups. Our study identified a panel of specific plasma microRNAs which can serve as biomarkers of T2DM and its complications and emphasizes the importance of sex differences in their clinical application. View Full-Text
Keywords: microRNAs; extracellular; blood-borne; biomarkers; diabetes mellitus; complications; sex differences microRNAs; extracellular; blood-borne; biomarkers; diabetes mellitus; complications; sex differences
►▼ Show Figures 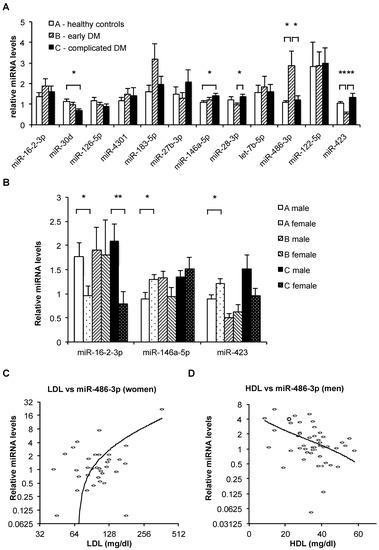