The objective of this study was to evaluate if administration of clove oil prevents scur/horn growth in dairy cattle long term. At approximately 4 days of age, calves had one of four treatments assigned to each horn bud: (1) clove oil administered subcutaneously under the horn bud (CLOV, n = 132); (2) cautery disbudded and the horn bud removed (BUDOFF, n = 126); (3) cautery disbudded and the horn bud tissue left intact (BUDON, n = 129); (4) a liquid nitrogen filled probe applied to the horn bud area (CRYO, n = 131). At approximately 16 months of age, all cattle were checked for scur or horn development. A sub-set of scurs/horns from the CLOV cattle were removed to evaluate tissue and structural development. In total, 5% of CLOV buds developed into horns and 63% into scurs; 10% of the scurs looked like normally developed horns but they were not attached to the skull. Cautery disbudding prevented scur and horn development in cattle when the horn bud tissue was removed, but some scur growth was observed in the BUDON treatment. CRYO was 100% ineffective at preventing scur/horn growth. Injecting clove oil under the horn bud appeared to delay horn development, but not prevent it, when administered to 4 day old dairy calves. View Full-Text
Keywords: calf; cautery; disbudding; cryoablation; horns; scurs calf; cautery; disbudding; cryoablation; horns; scurs
►▼ Show Figures 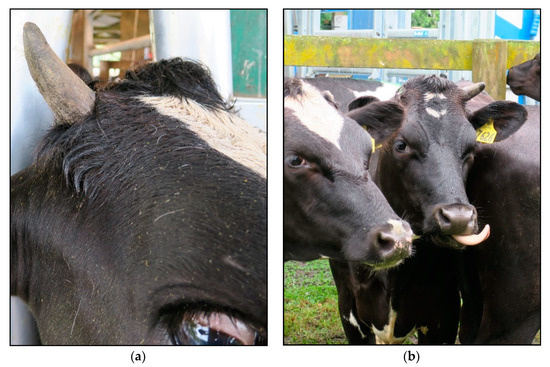