Halophyte plants are adapted to saline environments and represent a novel type of crops given their possible uses at both culinary and industrial levels. In this work, the nutritional quality of different Mediterranean halophyte species, Atriplex halimus, Salicornia fruticosa, and Cakile maritima, was evaluated under conditions of high salinity. For this, plants were grown at different NaCl concentrations (0, 100, 200, and 300 mM) and the contents of proteins, total lipids, polyphenols, and mineral elements were analyzed as well as growth. Of the three species, C. maritima was the most sensitive to salt stress and therefore showed the highest phenolic compounds content. By contrast, whereas salinity increased the amounts of proteins and phenolics with respect to the control in A. halimus and S. fruticosa, it decreased them in C. maritima. Plants of A. halimus accumulated higher amounts of Na+ in their leaves, but the level of this ion, considering human consumption, was below that of other culinary halophyte species. In conclusion, all the results indicate that these three halophyte species grown at high salt levels represent optimal crops for—new foodstuff—production as green salt or spice due to their nutritional potential. View Full-Text
Keywords: Atriplex halimus; Cakile maritima; minerals; phenolic compounds; Salicornia fruticosa; salinity Atriplex halimus; Cakile maritima; minerals; phenolic compounds; Salicornia fruticosa; salinity
►▼ Show Figures 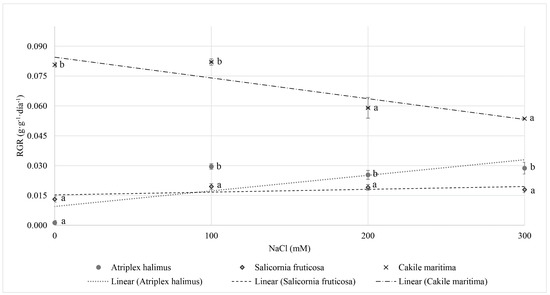 
Agudelo A, Carvajal M, Martinez-Ballesta MdC. Halophytes of the Mediterranean Basin—Underutilized Species with the Potential to Be Nutritious Crops in the Scenario of the Climate Change. Foods. 2021; 10(1):119. https://doi.org/10.3390/foods10010119


Agudelo, Agatha; Carvajal, Micaela; Martinez-Ballesta, María d.C. 2021. "Halophytes of the Mediterranean Basin—Underutilized Species with the Potential to Be Nutritious Crops in the Scenario of the Climate Change" Foods 10, no. 1: 119. https://doi.org/10.3390/foods10010119

Micaela Carvajal
Since 1998 regular staff CEBAS-CSIC (The Spanish National Research Council (CSIC) and since 2009 is Professor in Science. The lines of research or development in which she has worked mainly focus on the study of salinity and water absorption through aquaporin. During her research activity she has more than 120 SCI publications, 40 book chapters and 33 collective volumes. He has participated in 36 research projects, 18 as coordinator and has supervised 10 doctoral Theses. In terms of science and technology transfer activities, has 3 licensed patents and the creation of 2 spin-off of the CSIC.
Zoom | Orient | As Lines | As Sticks | As Cartoon | As Surface | Previous Scene | Next Scene
We use cookies on our website to ensure you get the best experience. Read more about our cookies here.
Accept
We have just recently launched a new version of our website. Help us to further improve by taking part in this short 5 minute survey here. here.
Never show this again