Farmers’ Net Income Distribution and Regional Vulnerability to Climate Change: An Empirical Study of Bangladesh
Next Article in Special Issue

The Hiatus in Global Warming and Interactions between the El Niño and the Pacific Decadal Oscillation: Comparing Observations and Modeling Results
Previous Article in Journal

Changes in Earth’s Energy Budget during and after the “Pause” in Global Warming: An Observational Perspective

The main features of the instrumental global mean surface temperature (GMST) are reasonably well described by a simple linear response model driven by anthropogenic, volcanic and solar forcing. This model acts as a linear long-memory filter of the forcing signal. The physical interpretation of this filtering is the delayed response due to the thermal inertia of the ocean. This description is considerably more accurate if El Niño Southern Oscillation (ENSO) and the Atlantic Multidecadal Oscillation (AMO) are regarded as additional forcings of the global temperature and hence subject to the same filtering as the other forcing components. By considering these as predictors in a linear regression scheme, more than 92% of the variance in the instrumental GMST over the period 1870–2017 is explained by this model, in particular, all features of the 1998–2015 hiatus, including its death. While the more prominent pauses during 1870–1915 and 1940–1970 can be attributed to clustering in time of strong volcanic eruptions, the recent hiatus is an unremarkable phenomenon that is attributed to ENSO with a small contribution from solar activity. View Full-Text
Keywords: hiatus; attribution; volcanic forcing; solar forcing; anthropogenic forcing; AMO; ENSO; multiple regression; long-memory response hiatus; attribution; volcanic forcing; solar forcing; anthropogenic forcing; AMO; ENSO; multiple regression; long-memory response
►▼ Show Figures 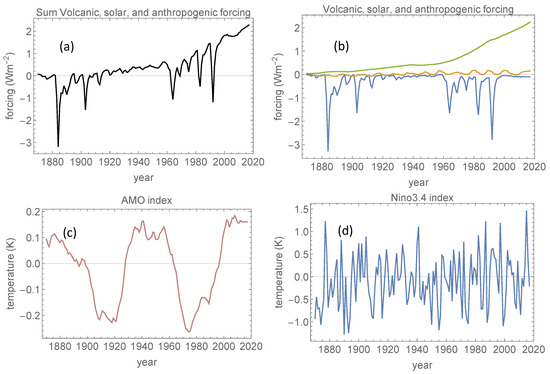