Interference Alignment for Cognitive Radio Communications and Networks: A Survey

Internet of Things (IoT) holds great promises for industrial, commercial, and consumer applications. While wireless techniques have matured with time and have gained the users’ confidence in relaying data containing qualitative as well as quantitative information, cynicism still exists on trusting them for applications involving control. The wireless protocols and techniques used for industrial control have proved their robustness. In this work we have attempted to test some aspects of feasibility on the use of wireless control involving such protocols for IoT healthcare sensor networks (IoT-HSNs). We conceptualized and simulated a 24-channel IoT-HSN model that includes biosensors as well as bioactuators. Currently, no protocol supporting control in such networks has been standardized. We tried to fit in the widely used WirelessHART (Highway Addressable Remote Transducer) industrial protocol for sensing as well as control in the model to test if it would work for a healthcare sensor network. We probed the performance of the model with respect to network parameters such as channels, bandwidth, Quality of Service (QoS) requirements, payload, transmission delays, and allowable errors. For the parameters considered, the results obtained from the model were encouraging, suggesting that WirelessHART fits the IoT-HSN control requirements according to this initial probe. The findings could provide useful insights for researchers working in the field of control in IoT-HSNs and for designers and manufacturers of IoT-HSN equipment. View Full-Text
Keywords: Internet of Things; healthcare sensor networks; biosensors; bioactuators; WirelessHART Internet of Things; healthcare sensor networks; biosensors; bioactuators; WirelessHART
►▼ Show Figures 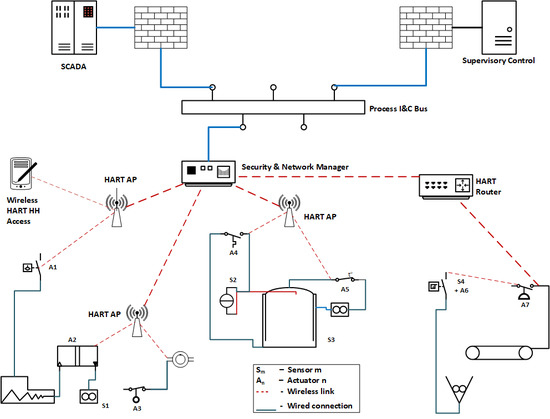