The ginger family (Zingiberaceae) includes plants that are known worldwide to have a distinctive smell and taste, which are often used as spices in the kitchen, but also in various industries (pharmaceutical, medical, and cosmetic) due to their proven biological activity. The aim of this study was to investigate and compare the chemical composition and antioxidant activity (AA) of essential oils (EOs) of four characteristic ginger species: Elettaria cardamomum L. Maton (cardamom), Curcuma Longa L. (turmeric), Zingiber Officinale Roscoe (ginger), and Alpinia Officinarum Hance (galangal). Furthermore, the total phenolic content (TPC) and AA of crude extracts obtained after using ultrasound-assisted extraction (UAE) and different extraction solvents (80% ethanol, 80% methanol and water) were evaluated. A total of 87 different chemical components were determined by GC-MS/MS in the EOs obtained after hydrodistillation, 14 of which were identified in varying amounts in all EOs. The major compounds found in cardamom, turmeric, ginger, and galangal were α-terpinyl acetate (40.70%), β-turmerone (25.77%), α-zingiberene (22.69%) and 1,8-cineol (42.71%), respectively. In general, 80% ethanol was found to be the most effective extracting solvent for the bioactivities of the investigated species from the Zingiberaceae family. Among the crude extracts, ethanolic extract of galangal showed the highest TPC value (63.01 ± 1.06 mg GA g−1 DW), while the lowest TPC content was found in cardamom water extract (1.04 ± 0.29 mg GA g−1 DW). The AA evaluated by two different assays (ferric-reducing antioxidant power-FRAP and the scavenging activity of the cationic ABTS radical) proved that galangal rhizome is the plant with the highest antioxidant potential. In addition, no statistical difference was found between the AA of turmeric and ginger extracts, while cardamom rhizome was again inferior. In contrast to the crude extracts, the EOs resulted in significantly lower ABTS and FRAP values, with turmeric EO showing the highest AA. View Full-Text
Keywords: Zingiberaceae family; cardamom; turmeric; galangal; ginger; essential oils; GC-MS/MS; antioxidant activity Zingiberaceae family; cardamom; turmeric; galangal; ginger; essential oils; GC-MS/MS; antioxidant activity
►▼ Show Figures 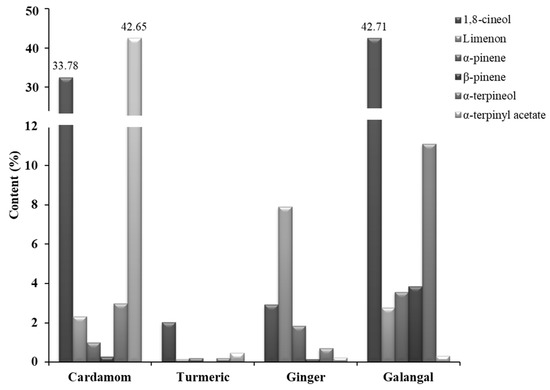